It can be noted from Figure 4 below that OU, for the first time in 2016, surpassed the UTM in terms of enrolment. The sustained growth of enrolment at OU can be attributed to the relative attractiveness of Distance Education and E-learning programmes in terms of their inherent flexibility for non-traditional learners/mature students/working adults. “ 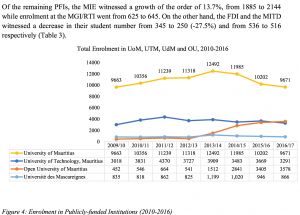 After being the only local public university that registered a very high positive growth (88%) in 2014, Open University of Mauritius is progressing with renewed energy. Its focus has been to enhance access to quality higher education at an affordable cost with great flexibility through open and distance learning (ODL). Indeed, ODL is the only way of combining work and family responsibilities with educational opportunities as it frees learners from constraints of time and place. As at 31 December 2017 Open University of Mauritius had a total enrolment of 5,741.

In line with its endeavour to provide the best learning experience to all its learners, Open University of Mauritius (OU) became the first ISO -Certified tertiary education institution in Mauritius on 3 July 2015.

The university has been re-certified from ISO 9001 :2008 to ISO 9001 :2015. The award of this certification is the result of the sustained effort of all staff of the institution to establish and maintain quality measures to meet the changing requirements of the public. ISO 9001 :2015 certification aligns with standards provided by international quality institutions and the Mauritius Standard Bureau, which is the local certification body.

OU organised its first graduation ceremony for 498 graduates from 8 to 10 July 2015. The Nobel Prize Laureate in Literature (2008) Dr. Jean-Marie Gustave Le Clézio graced this historic moment. During the first graduation ceremony, the Director-General, in the presence of the Hon Minister of Education and Human Resources, Tertiary Education and Scientific Research, awarded the first certificate of OU, namely Doctor Honoris Causa, to Dr Le Clézio.