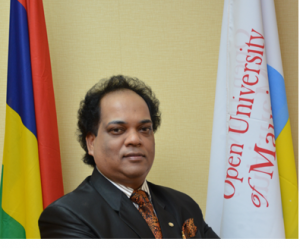 He started his career as a Lecturer in Mathematics at University of Mauritius in 1994. In 1996, he completed his PhD in Computational Mathematics from University of Mauritius and University of Loughborough, UK. He also holds an MBA with Distinction (ranked first) from University of Surrey, UK. He later joined the Mauritius Examinations Syndicate as Research and Development Officer where he started the marking of the first international paper in Mauritius. In 2005, he joined HRDC where he set up the Research and Consultancy Division as the first Manager-Research/Head of the Research Division. During his stay at HRDC, he led the development of the first National Human Resource Development Plan. He also worked extensively with the private sector.

He was a consultant and coordinator for ADEA (Association of Development of Education), UNESCO, ILO and UNDP. He holds an honorary senior lecturer position at the Imperial College, London, UK. He has been teaching Mathematics and Statistics. He has also authored several distance education manuals on Quantitative Research Methods, Mathematics and Statistics. He has published several research papers and supervised several Master’s and Doctoral theses.